The House of the Scorpion by Nancy Farmer

My Sister, My Love by Joyce Carol Oates 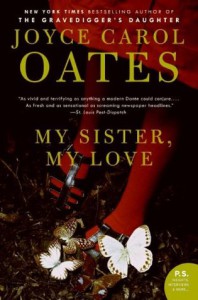 My Sister, My Love is a very unique intriguing book.  Although I am on page 427 out of 562 I can honestly admit I do not know whether I should mentally catagorise this book as a fictional memoir or perhaps a mystery, or simply a novel.  I believe a novel would be most accurate because so many different literary elements appear.  Overall, I have enjoyed this book immensely.  The story follows a young Skyler Rampike older brother to the famed young Bliss Rampike figure skating extraordinary.  Through out the novel the reader is introduced to the famed family in a new way, gone are the pretenses and prejudices of outside members looking in on such a "perfect" "wholly American" family.  Through Skylers (young) eyes the reader gets a good look at what life is like before and after Bliss' short sweet life as well as the heartbreakingly short time she was a part of this world.  Though often the story has the bittersweet tang that comes with a forgotten boy's narrative.  We get the opportunity to see this young boys life as he sees it, we get to almost feel the guilt and heartbreak that fell upon this child's life when his sister's was stolen.   Wonderful novel, beautifully written.  Definitely a must read. 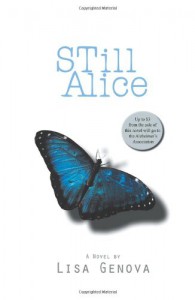 Still Alice is a beautiful book that I absolutely fell in love with.  It tells the heartbreaking tale of Alice Howland.  As the book starts with her being middle aged, shortly after a birthday.  Alice is Harvard professor, who specializes in linguistics.  She is very successful and lives a happy life.  She is married and has three children all relatively young, Anna, Tom, and Lynda.  Anna is her oldest, then Tom and lastly Lynda.  Anna and Tom are both studying to have important jobs, while Lynda is off studying to be an actress.  Alice is very worried that Lynda is not living up to her potential, and because of this the two do not really get along.  Suddenly Alice's life gets turn upside down with a devastating diagnosis.  Alice Howland has been diagnosed with early onset Alzheimer's.  Alice is forced to try to live with the monster that is stealing her life.  Probably one of the most beautiful, touching books I have ever read.

I Hunt Killers by: Barry Lyga 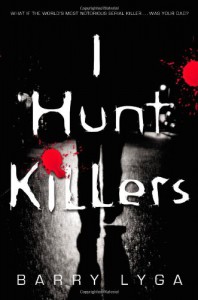 I Hunt Killers is a thrilling addition to Barry Lyga's collection of novels.  So far he has written seven different books surrounding Jasper "Jazz" Dent and his serial killer father.  Jazz's upbringing is about as far from normal as it comes.  His father is notoriously famous serial killer, who's crimes are known though out the country, spanning over a decade of time.  However Jazz's father is good at what he does, he does not even have a "type" making some say he is a new kind of killer.  Throughout Jazz's life his father raised him very differently.  With every day being "take your son to work day," Jazz has the horrible opportunity to witness his father committing his notorious crimes.  Jazz also learns all the ins and outs of the crimes allowing him to see crime scenes through the perpetrators eyes, the way many would like to, giving Jazz a real leg up in solving crimes.  Although Jazz's father has been locked up nice and tight for two years a new murderer has arrived in the little town that Jazz grew up in.  With exact copies of Jazz's fathers crimes, Jazz brings it upon himself to get to the bottom of the crime.  However he also must struggle to see if he is more than the monster his father made him, if he ever will be able to escape the shadow his father has cast, if he truly can change the idea of the Dent's name around.  Overall, I Hunt Killers is a thrilling, engrossing novel which I highly recommend.

The Rules by Stacey Kade 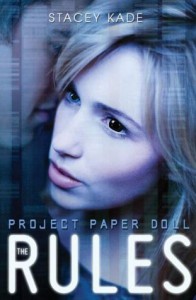 Stacey Kade does a marvelous job setting up this story.  Although it is a romance novel, it is also so much more.  Its a thriller, with suspense, it contains comedy and simple real-life innocence.  The book is written from the point-of-view of the two main characters: Ariane and Zane.  Ariane is a hybrid half human half extra terrestrial being.  She spent her first six years in a lab, being poked and prodded, tested and trained for her "purpose."  However she hates it.  She is being trained to kill, and her human half-no her loving half, as it could come from both sides of her breeding (who am I to assume extra terrestrials are bad) knows it is wrong.  Her life is changed one night after a mysterious explosion that breaks a hole in her hell and allowing her to escape.  Ariane would have undoubtedly have stayed simply for fear of punishment had she tried to escape, however Mark Tucker enters.  He takes her away and shelters and raises her for ten more years.  Throughout these years she has five set rules which she must not break lest be recaptured and that is the last thing she wants.  But when school drama gets taken a little to far, Ariane cannot help but step in, and with the consequences of that she falls in love.  Just how far will she go to keep Zane safe, is she willing to risk her freedom? I ask you is it better to have loved and lost than never loved at all? 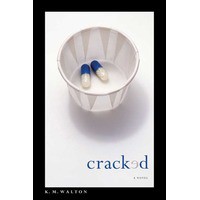 Cracked is a brilliant story.  It is centered around two very different characters.  William "Bull" and Victor, in many ways are similar but also vastly different.  They come from opposite backgrounds Victors parents being workaholics who never have time for their son and Bull being raised in a family dominated by alcohol.  Victor is a loner, because his parents have no way of expressing their for him in a way he understands, and always seem to seem disappointed in him, even when he does remarkably.  Bull is self reliant, and a bully, because that is how he reflects his home life.  Bull ironically bullies Victor, because Victor is an easy target, being self conscious, shy and without someone to turn to.  It all begins when Victor's parents leave to another country, without so much of a goodbye to their son, when Victor decides he's done; and attempts to commit suicide by over dosing on sleeping pills.  Meanwhile Bull comes in contact with a gun, with which he decides he's going to kill his alcoholic grandfather with, so he wont keep being abused.  However, his grandfather hits the gun causing it to shoot Bull in the leg.  The two boys wake up to the unfortunate truth that they have to be roommates in the local psych ward, to keep them safe.  They have to find a way to find peace with themselves, each other and the world or risk returning to a world worse than before. 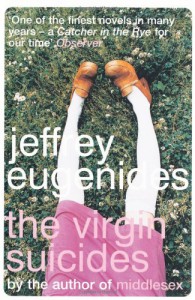 I read The Virgin Suicides on a whim.  It was so much more than I expected it truly blew me away.  Honestly I had to read it twice to truly grasp it, for it was so well done.  The book's narrator's identity is unknown through out the book, however you lean bits and pieces about him throughout.  It is centered around five mysterious sisters, who live in the neighborhood.  The youngest sister, Cecilia commits suicide.  It after shows the lives of the girls.  Their strange lives, and their stranger choices and how the boys adapt.  Its invigorating.

The Circle of Blood 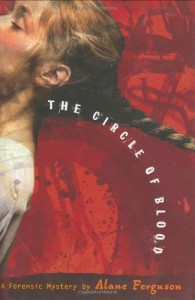 The Circle of Blood, a forensic mystery novel by Alane Furguson, was a thrilling read.  It is the third book in the series all focusing around the dramatic, traumatic life of Cameryn Mahoney.  It begins with her mother returning into her life, as up until this point she has been raised by her father and his mother.  Her father and grandmother are distraught by how dedicated Cameryn is to connecting with this women, after some secret tragedy broke their bonds of trust years before.  At this point Cameryn learns that in an accident years earlier her mother accidentally ran over and killed her little sister, leaving her father and grandmother distraught.  Her mother was then institutionalized for Bipolar disorder.  Cameryn feels as though her mother ought to be forgiven, and pledges to "protect" her mother how no one else will.  Cameryn then meets a strange girl who has gotten a ride with her mother.  The girl runs away with her mother's wallet and although Cameryn tries to catch her she escapes.  Later her body is found in after she supposedly committed suicide.  Fearing her mother would be connected Cameryn says nothing of her connection.  It is then determined that the girl was actually murdered and Cameryn's mother is arrested.  It is up to Cameryn to solve this murder, before her mother, and her relationship with her mother are tainted forever.

Neverwas is the second book by authors Kelly Moore and Tucker and Larken Reed, following Amber House.  It starts in a similar way as Amber House, but almost as if in an alternate universe.  The past is changed as the first book ends, and the second book is as if the changed pasted had continued without the story of the first book, however the main character, Sarah, slowly begins to remember this other "past."  Her aunt Maggie and her brother Sammy, remember the ending of the previous book as well as other echos, however Sarah, the main character, is remember more and more.  The setting is very confusing in the second book.   I originally though the first book took place in the South, approximately modern day, however in the second it has little in common with the original setting.  Instead Nazis are still a very real threat, discrimination is hugely common, and although Sarah is disgusted it seems quite normal to everyone else.  Jackson, another vital character, is dramatically different from the first book, he seems very unhappy, although I understand it would be unreasonable if he wasn't, after all he is not white.  I so far enjoy this book very much and I am excited to keep reading. 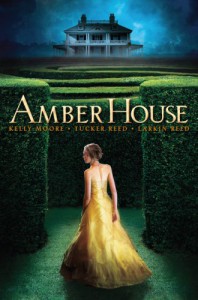 Amber House is a mystery/thriller book.  The story revolves around young Sarah, who finds herself in the possession of surprising gift.  She has the ability to see "echos" of her families' history by touching certain items.  Sarah is in a very tough position, with her mother possibly knowing about the gift, possibly even possessing it herself, and Sarah realizes if her mother knows, then Sarah and her younger brother, Sam will be taken home.  Without Sarah ever discovering where the diamonds are.   I am enjoying this book very much right now, and like the fact the book can be suspenseful, but not necessarily scary.  I am impressed with the character development, also it seems as though the author allows the reader to notice things that Sarah does not notice.

The Silence of Murder by Dandi Daley Mackall

The Silence of Murder was an excellently written book.  The ending is unexpected, and the author does a great job building suspense.  It is a great mystery.  The main character is Hope Long, and the story about how her brother is the main suspect in a murder trial. 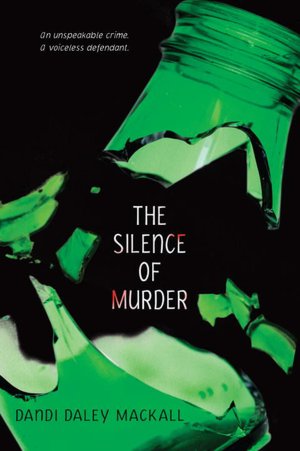